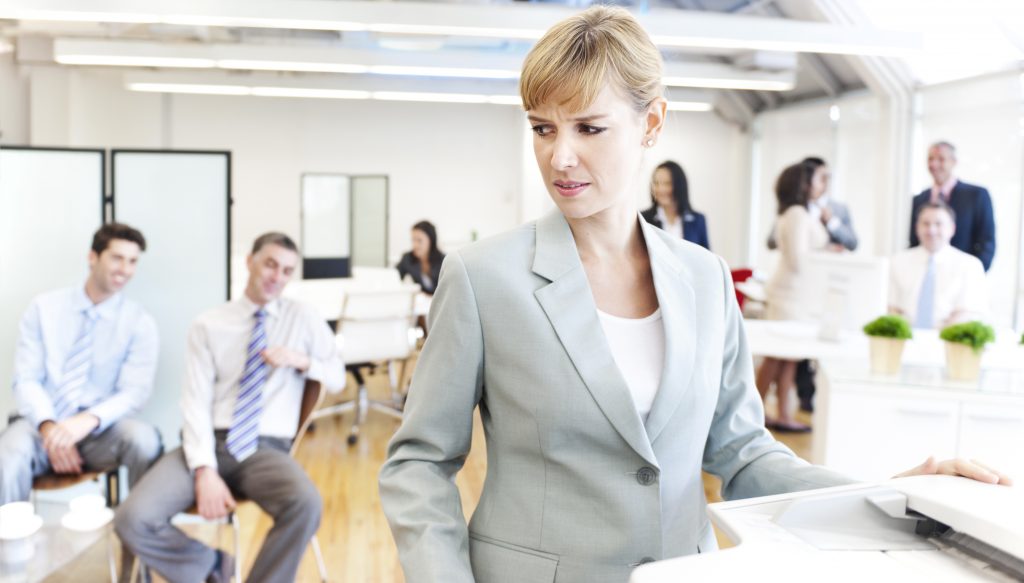 The country is embroiled in a much-overdue reckoning over sexual harassment and all other forms of sexual misconduct. And like a lot of important conversations, this one includes a fair bit of bad faith arguments and faux-clever contrarian “just asking questions” stances.

One of the most frequently seen examples of this dynamic involves commentators making some version of the point, “No one even knows what sexual harassment is  any more.” Viral horror stories about some innocent misunderstandings get shared and become popular with sexual harassment skeptics.

Still, while many of these “questions” are not exactly made in earnest, there are some real questions being raised in the MeToo conversation, both about identifying sexual harassment and – even more importantly – how victims should respond to and report that behavior. And that’s important, as many victims simply don’t know how to go about reacting to a clear instance of sexual harassment, which can make it harder for the victim to find justice.

What Qualifies as Sexual Harassment

Every state as its own laws pertaining to sexual harassment. However, the federal government also defines the term, considering it a violation of Title VII of the Civil Rights Act of 1964. This means that victims often have the opportunity to pursue legal actions through both the state and federal courts.

Generally speaking, sexual harassment is defined as unwanted sexual advances in the workplace, usually connected to questions such as hiring, promotion, compensation and other sensitive matters that should be decided by employee performance.

There is obviously a certain amount of ambiguity to this concept, and whether a given remark or act qualifies as sexual harassment depends on a lot of factors and the specific context of the work environment, especially the power dynamics involved. A compliment on a co-worker’s shirt can be pleasant and harmless or awkward and creepy, depending on who is paying the compliment and who is receiving it, for example. An off-color joke might be amusing in some contexts and wildly inappropriate in others.

So there’s no hard and fast rule for determining if action X is sexual harassment. That’s why it’s so important for organizations to have strong human resources and compliance departments, staffed by individuals who are qualified for the role and empowered to thoroughly investigate complaints, even against high-ranking managers.

If you’ve been the victim of sexual harassment, you have every right to report a complaint to your company and, if necessary, pursue legal action through the courts. Victims are often subject to intense pressure – whether implicit or explicit – and told not to “rock the boat.” But fighting for yourself and your legal rights is the right thing to do, both for your own benefit and for the protection of future victims.

If you’ve experienced frequent, repeated, unwanted sexual advances, especially connected with threats or offers of raises, promotions or other inducements, you’ve been the victim of sexual harassment, and how you respond is important. But it’s also up to you, and your comfort level with your employer.

When you’ve determined that you’ve been the victim of sexual harassment, your first step needs to be documenting the incidents. This doesn’t require some elaborate sting operation with hidden cameras – simply write down the nature of the harassment, as well as the date and time. Do it immediately, make multiple copies and ensure you have access to these records at all times.

Don’t Hesitate To Speak to a Lawyer

After doing this, contact an experienced sexual harassment lawyer. This might seem like a big step early in the process, and your first instinct might be to talk to someone at the company about the incident. But talking to an attorney as soon as possible is crucial. A lawyer who understands your state and municipality’s sexual harassment laws can provide guidance as to whether or not what you experienced qualifies as sexual harassment under the law, and advise you on the best course of action moving forward.

Once you’ve spoken to a lawyer and retained his or her services, follow your attorney’s advice. This advice can sometimes fly in the face of the steps you want to take, but remember, acting in anger is almost always a bad idea. Taking planned, measured steps in consultation with an experienced attorney is the best way to protect your rights.

In many cases, your attorney will advise you to speak with the individual involved, and then file a formal complaint with your organization’s HR department. However, it’s important to remember that human resources departments exist to protect the company, not you, so you should be prepared for a sub-optimal internal resolution.

What happens after that will depend on your company’s response, your lawyer’s advice and your appetite for further legal action. Still, it’s crucial you remember that there are laws designed to protect victims like you, and you have rights. You’re not alone, and you don’t have to simply put up with sexual harassment.