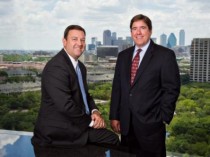 Michael Guajardo was born in Lubbock, Texas, and earned his B.B.A. in Finance and J.D. degree from Texas Tech University. While in law school, he served as the Articles Editor for the Texas Tech Law Review. Michael began his legal career with Thompson & Knight, P.C. in Dallas, Texas, where he spent approximately four years doing defense work in various types of personal injury matters. In 1996, Michael began representing injured victims, and he has continued doing so for the past 15 years. Michael worked for the Law Offices of Frank L. Branson, P.C. in Dallas from 2000 until August 2008, when he left to start his own law firm. In August 2011, Michael joined with his longtime friend and colleague, Greg Marks, to form Guajardo & Marks, L.L.P.