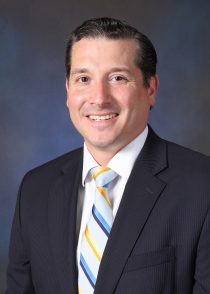 Robert Grabo represents clients who have been injured by the negligent acts of others, as well as defends those individuals who have been charged with a crime.

Rob has been fighting for his clients against big insurance companies for six years. Whether it’s a car or truck accident, slip and fall, medical malpractice, or if a client has lost a loved one because of the negligent act of another, Rob Grabo will be there to stand up to the big insurance company and fight to achieve the greatest result for the client.

Rob has helped clients obtain substantial settlements and awards for personal injury cases and vehicle accidents. As an experienced trial attorney, Rob understands what it takes to ensure that the insurance companies know they have a fight on their hands.

Rob also brings his aggressive style to Jezic and Moyse, LLC and represents those persons charged with a crime. Whether a client is charged with DUI/DWI, Assault, Battery, Theft, Drug Crimes, sex crimes, violent crimes, Rob will be there standing side by side with his client, challenging the State and confronting the evidence, to ensure that the client’s constitutional rights are protected. Even if the client is found guilty, Rob will continue to zealously represent his clients and show the judge why a sentence should be mitigated and reduced.

Rob grew up in Montgomery County, Maryland before attending law school in San Diego, California. After law school, Robert became a California licensed attorney and practiced Real Estate law. Rob quickly earned the respect of his peers and supervising attorneys at the Loftin Firm and was given the lead attorney role on cases the firm was handling.

Despite Rob’s wide range of experience, Rob dedicates a great deal of time to each of his clients and attends to them personally. Rob knows there are other attorneys out there, but Rob always works to ensure his clients know they made the right choice in choosing him as their attorney.

Rob is licensed to practice law in the states of Maryland and California, as well as the District of Columbia.