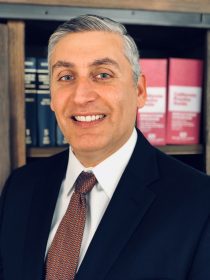 As lead trial counsel, Ara R. Jabagchourian obtained a $114.5 million alter ego verdict against the spouse of the CEO of HL Leasing, Inc., a directed verdict for $114.5 million against three corporate defendants, and a jury verdict in the amount of $47.22 million against two former corporate officers in a class action trial held in Fresno County. The case involved an alleged Ponzi scheme operated by HL Leasing, Inc. and had resulted in losses to over 1200 investors. Massoyan, et al. v. HL Leasing, Inc., et al., Fresno Superior Court Case No. 09 CECG 01839 August 5, 2011.

As co-lead trial counsel, Jabagchourian represented the City and County in San Francisco in a fraud claim against a city contractor who submitted false bills for payment. The city contractor brought a cross-claim seeking over seven million dollars of taxpayer money for an alleged violation of federal constitutional civil rights under 42 U.S.C. section 1983 related to the loss business value and nearly a million dollars under a breach of contractor claim. The jury found that the city contractor intentionally misrepresented claims made through the submission of false invoices to the City and County of San Francisco in addition to breaching the contract with it. Furthermore, the jury completely rejected the contractor’s claims for a violation of civil rights and its breach of contract, awarding them nothing. City and County of San Francisco v. Cobra Solutions, Inc., et al., San Francisco Superior Court Case No. CGC 03-417-218 February 15, 2012.

He also recovered the largest individual wrongful death verdict in San Diego County history, when a jury awarded $17.4 million to the wife and three children of a high ranking U.S. Naval Officer, who was killed while riding his bike in a collision with an American Medical Response transport van. Mazurek, et al. v. American Medical Response, et al., San Diego Superior Court Action No. 10-83975 May 20, 2011.

In the case of Davis v. Hope Life Foundation, et al., he obtained a unanimous jury decision related to an out-of-state financial organization that defrauded its customers through sham trusts and promissory notes.

In Murillo v. National Passenger Railroad Corporation, et al., he settled an action against Union Pacific and the State of California Department of Transportation related to the wrongful death of an elderly couple because of an allegedly defectively-designed railroad crossing. The case was brought on behalf of the children and grandchildren of the victims.

Jabagchourian represented Arthur Mkoyan, a Fresno high school valedictorian, and his family, who were facing imminent deportation after seeking asylum from the former Soviet Union in 1992. Arthur and his family were allowed to stay, with Arthur now attending college in California.

Jabagchourian was also appointed as liaison counsel in the matter of In re: Crown Princess Listing Incident, a case involving the substantial tipping of a Princess Cruise Line ship off the coast of Florida. The action involved more than 200 injured plaintiffs. The action was filed in Los Angeles Superior Court.

Following law school, he worked for the Federal Trade Commission’s Bureau of Competition in Washington, D.C., in investigations dealing with conspiracies, monopolization and mergers. In 2001, he joined private practice, working on antitrust matters with an emphasis in antitrust/intellectual property overlap issues.